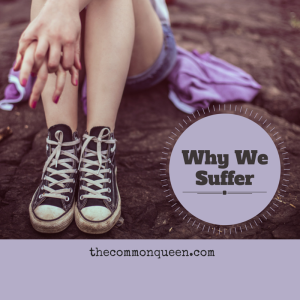 We live in a world that pursues pleasure. We are looking to “get rich quick”, “lose 10 pounds by Friday” and “live our best lives now”. We want to do what feels good and makes us happy and we want to do it NOW. Anything that hurts or is difficult is avoided at all costs. If there is time or commitment or cost involved we shy away thinking there has to be an easier way. This is nothing new. It’s been happening since the very beginning.

I think that’s been part of my struggle in the harder seasons. Don’t I deserve to be happy? Why can’t things be easy for once? I question and I cry and I wonder where I’ve gone wrong or why God is punishing me.

I’m getting dramatic, but that’s how I feel in the midst of it all. It hurts. It’s uncomfortable. And I don’t like it. Honestly, I don’t think I’ll ever *like* it. In this difficulty though I believe I’ve found some clarity on why we suffer. It isn’t because God hates us and wants us to hurt. It isn’t because we are screwing up (although that can be the case). It’s because He loves us.

What?!?! I know what you’re thinking. That’s crazy talk. I must have lost my mind. No, I’m not doing drugs and I haven’t been drinking (I know you asked yourself that).

God knows that suffering has the opportunity to produce something good in our lives and because He loves us and wants the best for us He let’s us walk through it. What good could it possibly produce? I’m glad you asked!

Not only that, but we rejoice in our sufferings, knowing that suffering produces endurance, and endurance produces character, and character produces hope, and hope does not put us to shame, because God’s love has been poured into our hearts through the Holy Spirit who has been given to us. (Romans 5:3-5)

It produces endurance and character and HOPE. And I need hope.

In the midst of the pain it’s hard to remember that something good can come from all of this. Recently, a friend shared with me this expert from the Streams in the Desert devotional and it was a powerful reminder to me that this process is necessary and the results are beautiful.

“Several years ago there was found in an African mine the most magnificent diamond in the world’s history. It was presented to the King of England to blaze in his crown of state. The King sent it to Amsterdam to be cut. It was put into the hands of an expert lapidary. And what do you suppose he did with it?

He took the gem of priceless value, and cut a notch in it. Then he struck it a hard blow with his instrument, and lo! the superb jewel lay in his hand cleft in twain. What recklessness! What wastefulness! What criminal carelessness!

Not so. For days and weeks that blow had been studied and planned. Drawings and models had been made of the gem. Its quality, its defects, its lines of cleavage had all been studied with minutest care. The man to whom it was committed was one of the most skillful lapidaries in the world.

Do you say that blow was a mistake? Nay. It was the climax of the lapidary’s skill. When he struck that blow, he did the one thing which would bring that gem to its most perfect shapeliness, radiance, and jewelled splendor. That blow which seemed to ruin the superb precious stone was, in fact, its perfect redemption. For, from those two halves were wrought the two magnificent gems which the skilled eye of the lapidary saw hidden in the rough, uncut stone as it came from the mine.

So, sometimes, God lets a stinging blow fall upon your life. The blood spurts. The nerves wince. The soul cries out in agony. The blow seems to you an apalling mistake. But it is not, for you are the most priceless jewel in the world to God. And He is the most skilled lapidary in the universe.

Some day you are to blaze in the diadem of the King. As you lie in His hand now He knows just how to deal with you. Not a blow will be permitted to fall upon your shrinking soul but that the love of God permits it, and works out from its depths, blessing and spiritual enrichment unseen, and unthought of by you.” (Streams in the Desert, J.H. McC.)

I believe and trust that God is taking all of these moments– the moments filled with tears and questioning and pain– and using it to do a deep work inside of me. The answer to why we suffer isn’t easy. It’s not easy to hear that suffering is for our benefit, but we can be confident that it will produce an unfathomable strength and beauty in us.

As always, if you are in need of encouragement or prayer please let me know by leaving a comment below. It would be my honor to do that for you! You aren’t alone.

One thought on “Why We Suffer”