The Awkward Challenges of Singleness

Stores have been stocked with bags of conversation hearts and boxes filled with assorted chocolates in preparation for Valentine’s Day before we even had a chance to put our Christmas trees to the curb. More chocolate in stores…who am I to complain?

I have even less reason to complain the day after Valentine’s Day because chocolate goes on sale. Chocolate is good, but 50% off chocolate is even better!

Truth be told, as a single person, I’m not anti-Valentine’s Day. Or rather, I’m not against the idea of it. I’m a fan of romance and love having an excuse to tell those I care about that I love them in cute/cheesy/adorable cards. (Did I mention there’s chocolate involved in this holiday?!) I’m not opposed to love, if anything, I wish every day were Valentine’s Day. And no, not just because of the chocolate, but because I think love should be celebrated daily. Or if not celebrated, at least shared.

It’s not easy being single around Valentine’s Day though. There’s those “Every kiss begins with K” commercials and the increase of rose/flowers pictures on Facebook followed by the “I’ve got the best boyfriend/husband…” declarations. Like I said, I think love should be celebrated so keep the romantic posts coming. I didn’t want to be on Facebook this week, anyway.

The single life has some awkward challenges.

A few weeks ago, I was talking to a married friend of mine. We were catching up since we hadn’t seen one another in a few months. As we shared, I’d mentioned some different places I had gone or things I had done (nothing super exciting mind you) and my friend kept telling me how much they missed their singleness and how lucky I was to be single.

As a single person, this is ludicrous.

I get there are “perks” to singleness. Heck, I’ve written about them. (You can read that post here.) We aren’t woken up in the middle of the night by a kid who wet the bed and we don’t spend our entire paycheck on diapers. At any time, we can go wherever we want without having to consult another person. There’s a lot of freedom that comes with singleness and when life seems to be dictated by another human being (especially one that isn’t even old enough to read yet) I imagine you’d day dream about five minutes of quiet. Or at least the ability to go pee without a crowd.

My point is, I have no idea how to respond to a married friend when they tell me I’m lucky because I’m single or how “good” I have it. When they say that I want to respond with, “I hear you using the word lucky, but I don’t think it means what you think it means.”

Then, there’s the “third wheel” scenario. Let me state this now– I am extremely thankful that I have married friends who invite me to things. They include me in their life even when that means I’m sandwiched between two booster seats. That’s love, people.

But it can get awkward. Like going out for dinner for example. If it’s a booth, do I let them sit next to one another while I sit across from them? Or, if it’s a table, do I sit between them– having one on either side of me? Then, there are times when you’re at a scenic area and they’d like to get pictures together, as a family, so you volunteer to take the picture. Afterwards, they ask if you want one, too (which is super thoughtful). I’m just glad that photo albums are basically obsolete with the increased popularity of digital prints and social media. I’d have albums full of pictures of me standing in front of various monuments. Like this one: 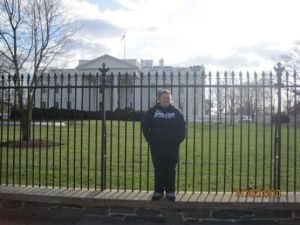 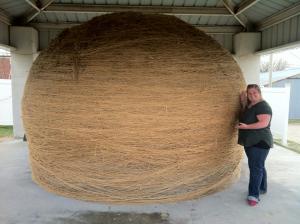 Yes, that’s me in front of the World’s Largest Ball of Twine in Cawker City, KS. Be jealous. So jealous.

Most of the time though, I borrow one of my friends’ kids to be in the picture with me. I’ve got hundreds of pictures of me with other people’s children.

One of the most aggravating of the awkward challenges is when people will accuse you of being desperate because you want to be in a relationship. I was unaware that having a desire somehow automatically put you in the desperate category, but apparently some people think that is the case. With all of the other challenges, I can laugh-off the awkwardness. That’s nearly impossible with this one. Sometimes, instead of defending myself I let the comment linger in the bloated awkward silence. Other times, my sass comes out on full blast.

Similar to that one, is how someone can assume you’re flirting with them just because you’re both single. I understand that friendliness and flirtatiousness can sometimes be confused, but my friendliness is sometimes just friendliness. Seems to be a tad bit egotistical, to me, to think otherwise. Shockingly, I’m not attracted to every single guy. Just the flannel wearing bearded ones. 😉

I couldn’t end this without bringing up the awkwardness of unsolicited advice.

He’ll show up when you least expect it.

Get a hobby! (Yes, someone did tell me this)

The list goes on and on. I find it funny that most of this advice comes from married people. Married people who have in fact been married for a long time…longer than I’ve been alive. Even funnier is the fact that most of the time I’ve been single longer than they ever were. Not that I think I’m some kind of expert, by any means, but I do have some experience in this area. More than I’d like, that’s for sure!

Awkwardness is a part of life. My advice on all of it? Don’t let it hinder you from amazing relationships. As single people, we need married friends. They tend to make dinner every night and if you treat them right they might just invite you over every once in awhile. We need friends of the opposite sex. They teach us invaluable lessons on their gender giving us helpful insights on how their minds work.

I could add more to this wonderfully awkward list, but I’d like to hear from you. What challenges have you experienced as a single person or as a married person in dealing with single people? Let me know in the comments!

8 thoughts on “The Awkward Challenges of Singleness”