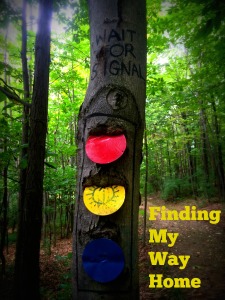 A friend came to visit me recently. She’s a few years younger than me and exponentially more athletic. Like a good friend, I thought since she had driven hours to spend a few days with me I could at least make sure she had a good time.

If you know anything about me, on free weekends (they don’t occur very often) I like to spend time vegging out watching Netflix. I always tell myself I should be productive and get some reading, writing, or cleaning done. That becomes difficult when they make every episode of the Frasier series available. What other options do I have but to start from Season 1 Episode 1?

Instead of making my friend endure through hours upon hours of a show she’s never heard of, we decided to spend our time doing some site seeing and hiking. When I say “hiking” read walking through the woods at a pleasant and mostly non-strenuous pace. Well, non-strenuous for some people. I, for one, was huffing it both days.

Our first day’s hike took us to a local state park that had beautiful waterfalls, stone bridges and lots and lots of stairs. We captured a few selfies to remember the adventure– one of which we took on “Lover’s Lane”. We laughed at the name of our selected trail, but I secretly hoped I might find a single, bearded lumberjack along the way. 🙂 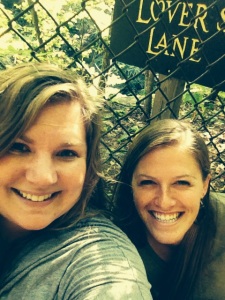 I didn’t find my lumberjack, but it was fun none-the-less.

The next day we decided to visit a Nature Center that had numerous trails and a scenic overlook that would show us the river and the valley below. I’d hiked there the previous summer and I didn’t remember it being too difficult. I remember enjoying the view and thought it would be nice to experience it again. The trail head included a map showing the different colored routes you could take. Each one indicating how long the trails were, where they’d join and which one would take us all the way to the overlook.

The over-sized map also included warning signs letting us know that this was a rattlesnake preserve land and that even though we most likely wouldn’t see one, if we did, to proceed with caution and report it to the Park Ranger. You won’t have to worry about that, Ranger Man, if I see a rattlesnake the entire hillside is going to know about it. Also, I’ll be the blur running past you at record speed.

We didn’t see a rattlesnake on our hike, thankfully.

But we did get lost.

You see, even though we had taken a picture of the map with our trusty iPhones, and there were colored markers every few yards, somehow we got off track. We started off following the red trail, but somewhere in the middle of our hike the red markers disappeared and all we saw were yellow markers. There was no overlook and there certainly wasn’t a bench. I was convinced we had been walking exclusively uphill at an 80 degree angle. The sky was getting dark overhead and I was hearing the slight rumbles of thunder in the distance. Of course the Weather Man’s prediction of rain would be 100% on the money while we were stuck on some trail not quite sure if we were coming or going.

I was getting discouraged and my brain was just beginning to hit panic mode. I didn’t want to get stuck walking circles in the woods–especially if a storm was coming. In a moment of pure genius, my friend checked the compass on her phone. I’m sure she did it because she realized I was starting to fray around the edges. We had managed to have ourselves pointed in the direction that led us out of the woods and back to the Nature Center within minutes.

We had read the signs wrong, but we made it back home.

As we walked through the parking lot, and drove down off the hill, I wondered how often that has happened to me in life. I was walking around, enjoying my company, the lovely views and gotten myself off track. Realizing I wasn’t quite sure where I was, began to panic noticing the dark clouds. And yet, I’d make it home safe and sound all because I knew what direction would lead me there.

I’ll be the first to tell you I’ve gotten off track before….many, many times. I had mistakenly thought I was doing the right thing only to find out that along the way I had taken a wrong turn. Sometimes I’m quick to see my misstep and other times I’m out there wandering like the Jews in the desert circling the same mountain over and over again.

Then, there in the midst of my panic, confusion and uncertainly I finally stop and set my eyes back on God. My focus back now where it should be, He leads me out and leads me Home.

His grace welcoming me back.

3 thoughts on “Finding My Way Home”