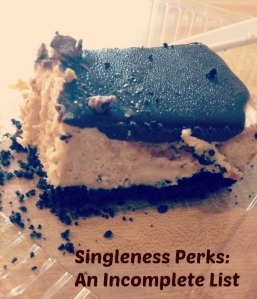 After last week’s post on singleness, you might be thinking that being 30 and single is all bad. Let me assure you, there are some pretty amazing perks to singleness. Sure, I’d really love to have a husband and kiddos to call my own, but for now I’ll enjoy the silver lining that comes with my relationship status.

That’s bad enough! Tuesday is laundry day at my house, which means that I haul my dirty laundry to a nearby laundromat where common drug dealers and wifi leeches gather. Most visits earn me a new best friend. One night it was a guy trying to convince me that someone stole all his clothes from a washer, but somehow it didn’t show up on the security video. Must have been quite the magic trick.

Once my laundry is washed, dried and folded I load it back into my car and take it home. It then promptly sits on my couch until Sunday (at the earliest). Seems like a waste to put it away when I’m just going to be wearing the same underwear, pants and sweatshirt tomorrow. Right?

Speaking of underwear, I only have to wash MY underwear.

There’s a local bakery/cafe that I like to visit every so often. They have the most amazing cupcakes and cheesecake around. On especially nice days, I like to get a slice of their Turtle Cheesecake and sit out on the patio and watch the world pass by. I get to do that without sharing!

I know how motherhood works, generally. I know that food (if not hidden) immediately becomes common property in a house. That means everything yummy gets claimed by grubby little fingers that will take one bite and leave it somewhere to be found by the dog who is grateful for the discovered treasure. Later to be thrown up (by said lucky dog) and cleaned up by Mom who only wished she had gotten to eat that brownie herself.

#8: Throw up, snot & other bodily fluids all belong to me.

This seems pretty self explanatory, but let me paint a picture for you. I was over at a friends house while her kiddo was sick. We just finished dinner and little buddy started one of his coughing fits. He grabbed the nearest garbage pail (really, quite thoughtful of him, I’d say) and handed it to his mom. At which point he threw up, what looked like a FOUNTAIN of vomit into the pail. He felt better, while the rest of us wondered if we too would lose our dinner. That night I had a dream I was swimming in a fountain of vomit. At least for now, the only vomit I’ll be having to clean up is my own. I’m ok with that.

#7: I get to choose where I spend holidays.

There’s no fighting with a significant other about where we’ll have to spend Christmas, Thanksgiving, Mother’s Day or any other holiday. Whether it will be with his parents, or mine, or if we’re going to try and start our own traditions with our kids. I’d like to think that for now, this makes me the favorite child since I can still spend every holiday at my parents house. Although, since I’m not bringing them any grandchildren it’s kind of a toss-up.

#6: I don’t need to clear my schedule with anyone else.

Basically, I do what I want. I come and go as I please. I can take an unplanned trip to see a friend or schedule an impromptu dinner date. I could go to a Midnight showing of a movie if I wanted. But I’d never want to do that because I like to go to bed early.

Although, I would like to clear up a common misconception. I do not have “more time” than someone who is married/ has kids. We all have 24 hours, and my days get filled up with work, meetings, volunteer opportunities, and LIFE just as much as anyone else’s. Please, keep that in mind. I can’t tell you how many times I’ve heard “You’re single. You’ve got the time to do it.” Oh ya, I forgot. All I do is sit home at night and weave baskets and write sad poetry.

I’m sure cuddling has its perks, but there’s nothing quite like being able to sprawl across the width of my bed if I want to. And I do want to, sometimes. It also means I can have 4 pillows on the bed and there’s no one to complain about it. I don’t have to make the bed in the morning because I’ll just be getting back into it later that night. I also don’t have to worry about stopping my “snooze alarm” habit any time soon. I can keep hitting it for an hour and the only person that’s going to get angry is me because it means I actually have to get out of bed now.

#4: The luxury of sleeping in on a Saturday morning.

Like I said, my schedule is of my own making. That means if I want to have a Saturday where I can lay in bed until 11, I can. I don’t have any little feet poking into my kidneys taking up the entire bed.  I don’t have to worry about taking a kiddo to an early morning T-ball game. I can keep my PJ’s on until 3 in the afternoon, and eat pickles for breakfast.

#3: I can eat pickles for breakfast.

I probably wouldn’t eat pickles for breakfast, but I have had cold pizza, chocolate chip cookies or the occasional Terra chip. Don’t judge me. I’m also a fan of breakfast for dinner, but that seems to be a trend that many (smart) families are picking up. Well done, friends.

#2: Shaving my legs is optional.

I get that this may be TMI for some of you, but it’s a perk that can not go unmentioned because its a big deal. Any woman will tell you shaving is a serious pain in the butt. The fact that I can go weeks without shaving my legs without another human being knowing is pretty spectacular. Summer kinda dampens this perk a tad because I try to conform to social norms as much as the next girl. Exposed hairy legs tend to be a turn off for single males.

#1: I don’t have any shame when it comes to celebrity crushes.

I’m never going to meet him. Or marry him. Be it Tom Hardy, Tim Tebow or Matthew McConaughey in “How to Lose a Guy in 10 Days”. Seriously though, look at that face:

Someday, and someday SOON I hope, I’ll be trading these perks in for the perks of married life, but for now I’m grateful I can see the positives of this season. It may not be where I thought I’d be at this point in life, but sometimes its not that bad.

What about you? What perks have you found in your singleness? Or maybe, what do you miss most about being single? Comment below.