The Uncovering: A Memoir (Part 1)

Your story is the key that can unlock a person’s prison. Share your testimony.

Most people don’t know much about my childhood. That has been by design. Very few people have been allowed into that darkness because I have locked it up and buried it away. It’s not a pretty sight. People, in general, don’t like things that are ugly or awkward or difficult. They will quickly avert their eyes and keep walking. I’m no different. Pain comes with remembering and I don’t like to hurt.

I’ve been tight lipped for years fearing that if I voiced my disappointments, struggles, memories that someone would come along and tell me that I didn’t have a right to feel the way I did. That fear materialized a few weeks ago, on an early Saturday morning. After 7 years of silence, I heard my biological mother’s voice on the other end of the phone telling me how I “over-dramatized” my childhood. That things really weren’t that bad and that I was just a selfish kid.

I’m not trying to make myself out to be a martyr, or her a villain. I just want the freedom to express in hopes that in these words there will be freedom for my own soul and possibly for yours too. There are more prison cells to unlock, more memories to shine light on and it is my intention to do just that.

Many of my memories are triggered by an event, a smell, a voice. This past week, the bible school I attended, held its graduation ceremony. Looking at pictures of cap and gowned friends, instantly transported me back to that same event, 9 years earlier. The morning of I got ready with friends while my heart raced with anxiety knowing both my biological mother, her boyfriend and my step-dad would be in the same room at the same time.

The last time this group gathered was at my high school graduation. At one point it had me escaping from my own party to hide in my sister’s room to cry. My step-father had arrived at the ceremony with the stench of beer on his breath. This should have been no surprise since he drank all day, everyday for as long as I had known him. He refused to stay for my party because of others who would be in attendance. The others, included his ex-wife and her boyfriend. Things would have turned explosive if he hadn’t retreated. He not only drank, but without warning would transform from the life of the party into an angry, abusive, scary man. My biological mother lavished me with expensive gifts in an attempt to make up for our lack in relationship. At 17, I remember feeling sorry for her. She thought my love could be bought. At this moment, I was her shining achievement. Those feelings were book ended with me being the shittiest most ungrateful daughter– so it was difficult to enjoy “the moment”.

I had been determined that my college graduation would be different. That there was something amazing to celebrate. Three years of working two jobs and endless nights of studying now behind me and exciting new adventures on the horizon.

My class gathered in the hallway of the church where our ceremony would take place. Just us, together, one last time. My eyes filled to the brim with tears, not because of joy and excited anticipation, but because I was afraid. My heart was frail and I feared the conversations and conflict I knew were going to take place. My mom (the woman who took me in at 13 to raise as her own) came and found me. Somehow she just knew I was in turmoil and that at that very moment I needed her love and her hug. I was standing in a small huddle of friends, taking pictures when I saw her walk through the closed double doors. My heart gave a heavy sigh of relief, as the tears flowed. For the moment, I was at peace.

She hugged and kissed me, whispering in my ear about how proud she was of me and how much she loved me. We snapped a picture and she went back to the auditorium and I went back to my friends. 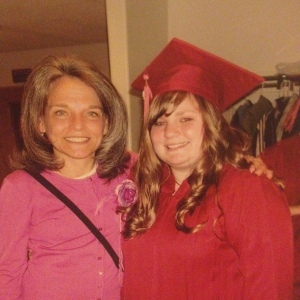 The day progressed the way I knew it would. My step-father showed up late and watched the graduation ceremony from the sanctuary doorway. He hugged me as the class processional passed him. After which, he retreated to his girlfriend, his truck and a nearby steak restaurant. My biological mother played her usual part as manipulator and gave the day a familiar shade of shame. This accomplishment of mine seemed like a waste to her and my next-step plans didn’t sit well with her, either. Her slyly veiled jabs winded me, but I was able to endure like I had so many times before– with a tightly shut lip and a look of resignation.