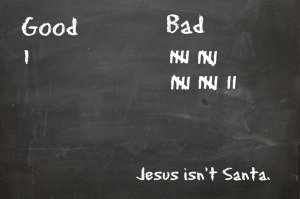 If you’ve read any of my recent posts, you may have noticed I’ve been asking God some questions– mostly the “Why?” question to be exact. I’ve also admitted that I need help. The struggle has been real. Gut wrenching, anxiety inducing, don’t want to get out of bed….REAL. Praying has been difficult. Hope has seemed just beyond my reach. Regardless of that, I’ve continued to pray, continued to seek Hope and held on for dear life.

Thankfully, I’ve had numerous friends, who are much wiser and much more stable than I am, come alongside me acting as a practical conduit of God’s love. After talking in length to one such friend, she asked me “What lie are you believing about the character of God?”

Huh. Well, you see I went to Bible school. I have a degree in Bible AND theology. I’ve read the Bible through front cover to the maps in the back. Not just once, either. Numerous times. I don’t say that because I think I’m awesome stuff, but to make a point that I’ve made before– I KNOW a lot of stuff about God. Sometimes that head knowledge doesn’t translate correctly. Sometimes you can know all the right stuff, but be living as though that stuff isn’t true.

Sure, Jesus wears hippie sandals and a robe (usually a white one). He’s got a beard and hands calloused from a long day in the wood shop. He smells a little fishy, but the kids are ok with it and come to Him anyway. Santa on the other hand wears a furry suit and shiny black shoes. He’s got a beard too, but its white and contains cookie crumbs and milk dribbles. He’s got a labor force to do the hard work for him, but gets all the glory for making the deliveries. Kids like him, too.

Everyone knows that Santa is keeping track of who is naughty and who is nice. He’s got an alphabetized list with all of our names on it. He’s always watching us and he’s keeping score. He saw me doing 64 in a 55 this morning. He heard the words I mumbled when I opened my car door and snow fell on my seat. All that before 8:30 a.m. Suffice to say, I’ll be getting coal for Christmas.

With all that Bible knowledge I have, I know Jesus is aware of all that stuff too. He knows my thoughts (I’ve heard Santa isn’t a mind reader), which exponentially increases my naughtiness I assure you. With everything that’s been going on, well, with my entire life as the gauge I’ve been living as though Jesus IS keeping score. He’s so stinkin’ good at math and easily sees I’m not measuring up. Since I’m bad He’s keeping some gifts from me. Like a husband. Like a miracle check in the mail to pay these medical bills. Like a new car.  (Insert whatever it is you’ve been asking for and not getting)

All of that– its all warped. Jesus is very much aware of everything I do, say, and think. He isn’t some sadistic moral score keeper though. He doesn’t take pleasure in my mess ups or failures thinking its one less kid to bless. Actually, He loves to give good gifts. Not the Target clearance aisle gifts either, but the top of the line, A-grade stuff. One of my favorite things to do is find the perfect gifts for those I love and can barely contain my excitement as they open it. We’ve already determined that I’m not perfect or even a very good person, and if that’s how I feel– how much MORE does God love giving gifts. He’s just as amped up with anticipation as He says, “Hurry up! Open it! I can’t wait for you to see it!”

And His greatest gift towards me isn’t a 60k income, a new hybrid Nissan or a sexy bearded lumberjack husband. It’s Himself.

In giving Himself for me, He moved my name from the naughty list to the redeemed list. My sins are no longer counted against me, but have been assigned to Jesus. That transfer makes me wholly accepted and fully pleasing to a holy, righteous God. Not by my works (or prayers) but all because of Jesus.

One thought on “Jesus isn’t Santa.”